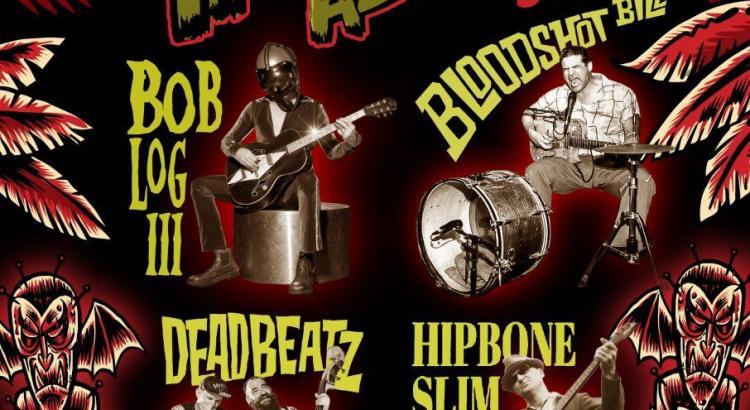 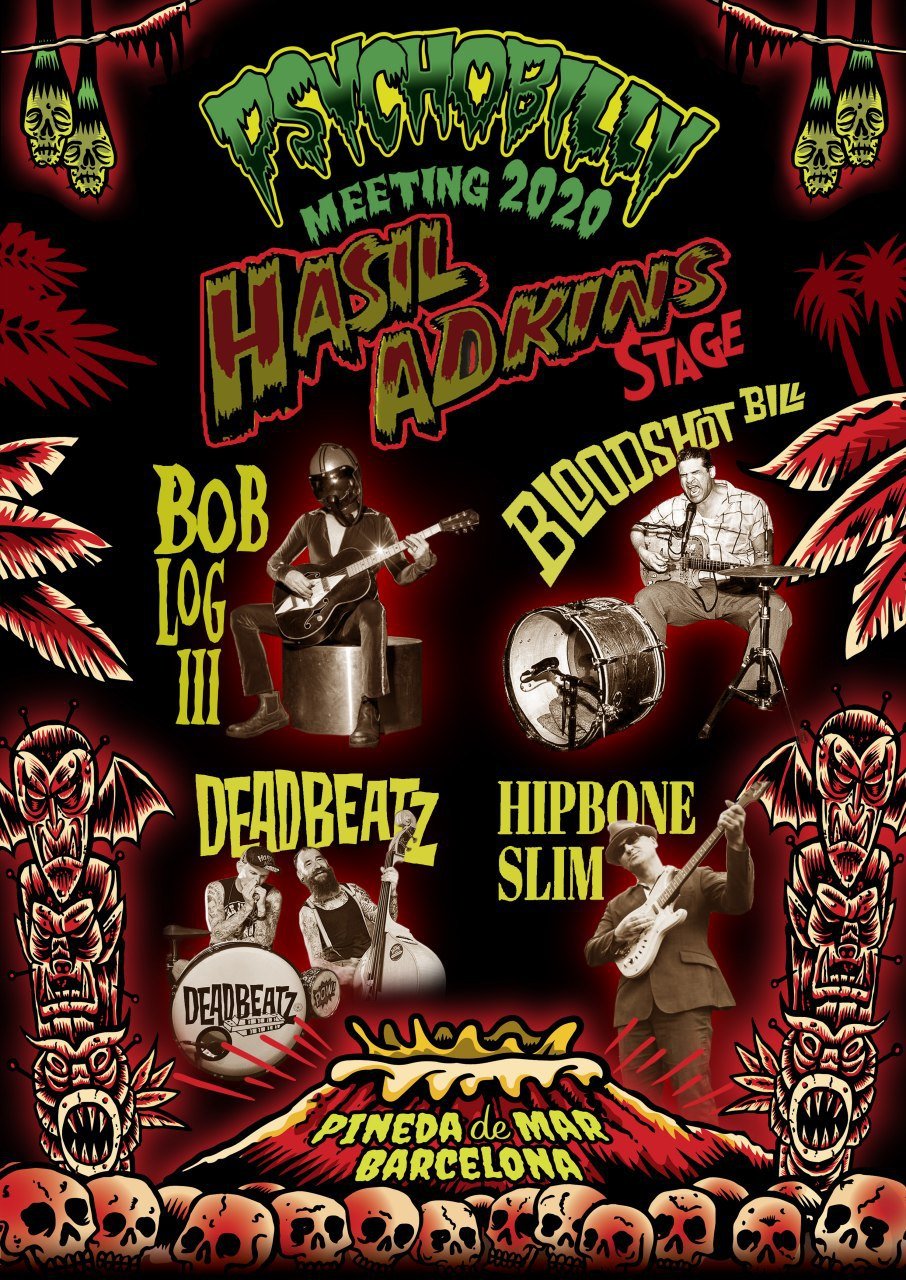 Here we go once again !! Last year was a big success and this year we coudn´t miss it!! Is called the HASIL ADKINS STAGE and it will be running between the bands from main stage, It will be held outdoor in the terrace of the PSYCHOBILLY MEETING VILLAGE ! Primitive , wild, rude and raw Rock and Roll from the best artists of the genre:
BOG LOG III, BLOODSHOT BILL, HIPBONE SLIM and DEADBEATZ !! Get ready to Do the Chicken Walk !!!

Legend says he lost his hand in the Arizona desert and he replaced it with an ape paw, that´s why this man has invented his own way to play the guitar and in the process created his own style. He started when he was 11 and got impressed by AC/DC, years later he would replace them for the old masters like Chuck Berry or Bo Diddley !

Dressed with a bullet man jumpsuit, black motorbike helmet he is able to slide the hollow-body guitar and hit the drums with all the dirty scuzzy joy in his heart. It Is loud , strange and electryfiying.
Bog Logs live shows are wild and unpredictable affairs, if you see him, don´t get our of the way, just jump right in there with him, and as long as you live you will never forget what he taught you !

Straight from Montreal, Canada, this greasy Rocker bathes in his own brand of hair wax, he simply couldn’t miss being with all of you at the Hasil Adkins Stage this year so don´t you dare miss him because he is bringing strength and power to the performance !

Bloodshot Bill began his career in 98 just with a guitar, an effects pedal and a bass drum. In those years when he was not on tour he was in the studio, with more than 30 albums recorded and edited in Europe, US and Canada with legendary labels like Norton Records.
Being a master in his One Man Band, he used to do collaborations with other artists such as King Khan, Deke Dickerson, Jon Spencer, or the Japanese … The 5.6.7.8’s.

But his career has gone further, he has also recorded themes for films and has been recently nominated the best rockabilly artist for the prestigious Ameripolitan Awards.
The famous film director John Waters said “he was like Roy Orbison but with a wound in the head” !

His many influences are Hasil Adkins, Charlie Feathers or Link Wray, make a smoothie of all this combinations and find it out this July in the Hasil Adkins Stage ! The greasy BLOODSHOT BILL !!

HIPBONE SLIM
In the world of Rock & Roll world there are certain dudes called workaholics for their commitment and for being workaholics. Although it could mean a health problem for some of them sometimes, for us it is huge luck, especially because it’s HIPBONE SLIM, How this man is capable of doing what he does is one of the best kept secrets in the UK Rock and Roll scene. With a catalogue of more than 400 songs in numerous diverse projects.
Hipbone Slim, aka Sir Bald Diddley is one of the most respected and beloved musicians in the Garage, Surf and Frat world ! This One Man project reviews old tunes such as own compositions of punk, blues, raw rockabilly or primitive garage played with a guitar, drums and his harmonica , influences from Howlin ‘Wolf, Link Wray and The Cramps.

This is pure dynamite that will blow your mind!! The British 6 strings king will open the backdrop of the Hasil Adkins stage !!! HIPBONE SLIM

This is a short story about a long beard. A small story about a big incident that formed the style of this band.
A tale about two guys with a bass, harmonica, drums and a singer with the above-mentioned long beard.
What you hear ISN´T what you get! You´ll get a lot more here !
Two guys on a mission to prove the world how powerful the blues can be.
Teaching their audience “no guitar player needed”. Punk/Blues at it´s best ! Pure, raw, and hard-hittin’!
Drummer David Karlinger concentrates on his harmonica chops in this band and works the drums with his feet. Bernie Miller slaps that double bass and is the man on the microphone as well.

If you don´t believe that these two aren’t enough to produce a forceful sound then you should witness of their live show in the Hasil Adkins Stage !
Let them BLOW YOU AWAY !!!